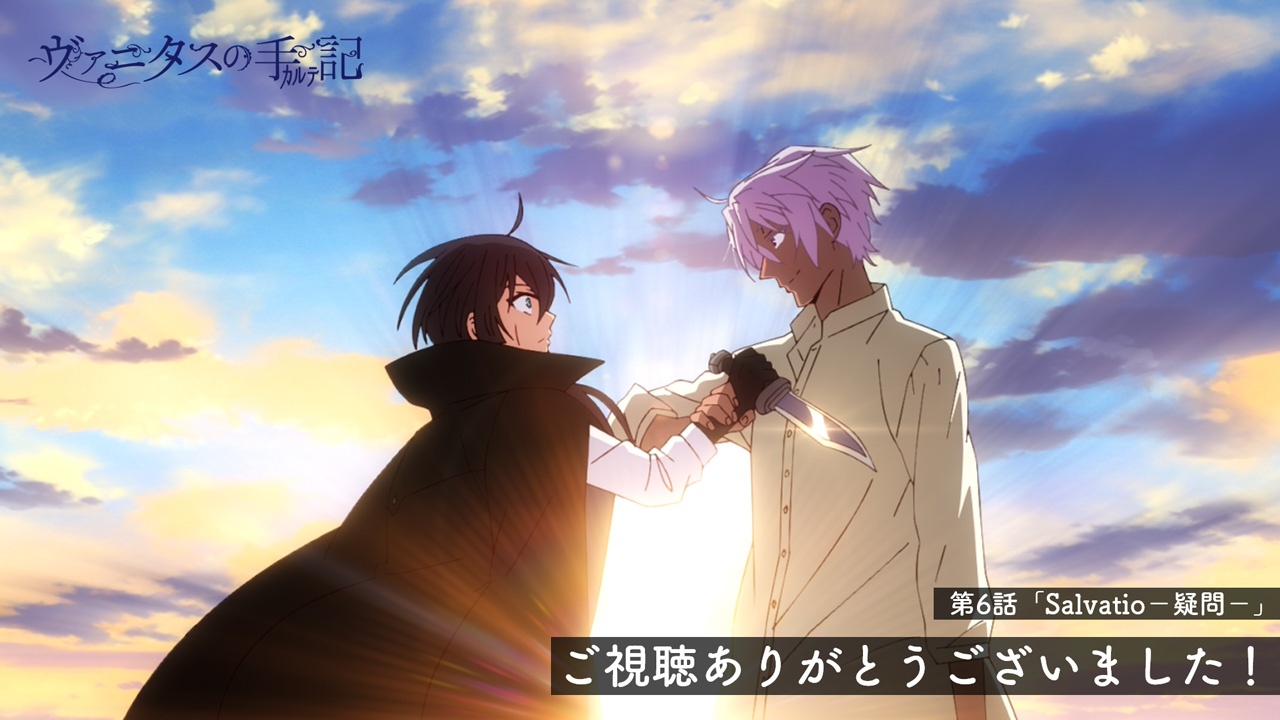 Vanitas no card come back for another week. In its sixth part, Vanitas prevents charlatan's envoy Naenia from taking Noah's real name. However, the "malnoun" of several assistants creates a musical dissonance that drives vampires insane, so that the doctor of the blue moon has to take care of the infected. Noé and Domi help him, but just at the moment when there is only one cursed man left, Veronica de Sade seems ready to kill Vanitas, whom she blames for what happened. Dominique tries in vain to stop her.

On their escape, Noah and Vanitas find a girl with the "malnoun". Man declares that it is too late and instead of healing it, he dissolves it. Noé reacts angrily, but they are interrupted by Veronica de Sade, who freezes Vanitas. Lord Ruthven, Lucas' uncle, appears just in time to find out what is happening. When Vanitas is asked directly, he replies that he was the one who killed the little vampire. However, Noah steps forward and protects him. Ruthven decides to guard both of them under her protection. Luca appears and Noé loses consciousness.

At dawn, Noah finds Vanitas in a church tower. He confronts him and they agree that each of them will do what he wants and that he will want to follow him because he is intrigued.

Analysis: "What is salvation?"

Definitely if there is an attractive factor in the characters of. gives Mochizuki At Vanitas no card, it has to be that almost none of the most important remains embedded in a single face. There are several facets that come to light in the same person, such as the tender side and the fatal feminine side, which coexist in Dominique de Sade. In this sense, Noah's emotional intelligence stands out in this chapter. While his memories were deepened in the previous episode, it's easy to enrich characters with a tragic past; the hard part is reaching a diverse personality like yours.

Our main vampire is not only innocent, curious and passionate, he can descend from the clouds and make complex sentimental evaluations, delving into the secrets of Vanitas and himself. His confession in a dream with the teacher and his confrontation with vanitas are very successful. That level of self-criticism that makes you think it's wrong to have false expectations of someone who has been honest from the start is great. The form of the dreaming protagonist is broken, he provokes the person in the blue moon and forces him to bring out the negative side that he always hides.

On the other hand, the final scene in which they speak isn't just important to Noah. The mask that Vanitas always wears is broken. By getting angry and rejecting Noah by attacking him, he brings out those dark emotions that torment him and that he hates to confess. There is an escape from the theatrical and unshakable character, because it shows that the things that surround him affect him, that they harm him.

Other elements of the chapter like the progression of the story, the soundtrack and the animation give me a sense of in the crescendo. I mean, up until now they are getting better with every new chapter.

Of course, the time had to come to weigh in. Already up to date with the manga by Vanitas no card, and check Pandora hearts, I'll uncover why it outperforms its predecessor in both the manga (the story itself) and the anime (the soundtrack which I think it doesn't beat, although it might go with it). Now I would like to emphasize that it is my opinion, my subjective perception of both, like everything that concerns an evaluation. I also have to emphasize that since the manga is far from over, my vision could well be changed as the releases progress.

First the animation of Pandora hearts does not have the pantomime of Vanitas de carte nowhere near. In addition, they are not so far apart in terms of time and technology that one could say that it is about time. The drawing of the first is more pleasant in the manga than in the anime, in the second there is an amazing visual representation (beautiful) of the characters and the environment. Hence, the transition from manga to anime is an achievement in Vanitasbut not quite in Pandora Hearts. Although the latter's soundtrack is a gem and the animation itself isn't bad, just in Vanitas it is… outstanding.

As for the story itself, I confront the first 50 chapters of the manga from the first to the second, which are more than enough to determine that the plot of Vanitas no card is an overcoming of Mochizuki (I will not spoil):

Vanitas no card shows for another week that his animation and his story are worthwhile. With each new episode, the landscapes, backgrounds and character designs are spoiled. The soundtrack opens a special hole in the ear and the emotion of the viewer.

Indeed, for the careful viewer, attention to insignificant details can give an idea of ​​the work of the animation team behind this project. I was surprised - if not to say rocky - with the pronunciation of Luca's full name (Lucius) with "k", like "Lukius". In fact, in classical Latin, this is the puristic pronunciation that almost never - if not never - nobody uses.

Finally, we need to highlight the psychology of Noah and Vanitas, which does not stop growing on the most intimate levels of expression, in the various facets that an individual person can express. I just love Noah's personality.

Attack of the Giants 4 – Part 2: Director’s Commentary and Production Challenges