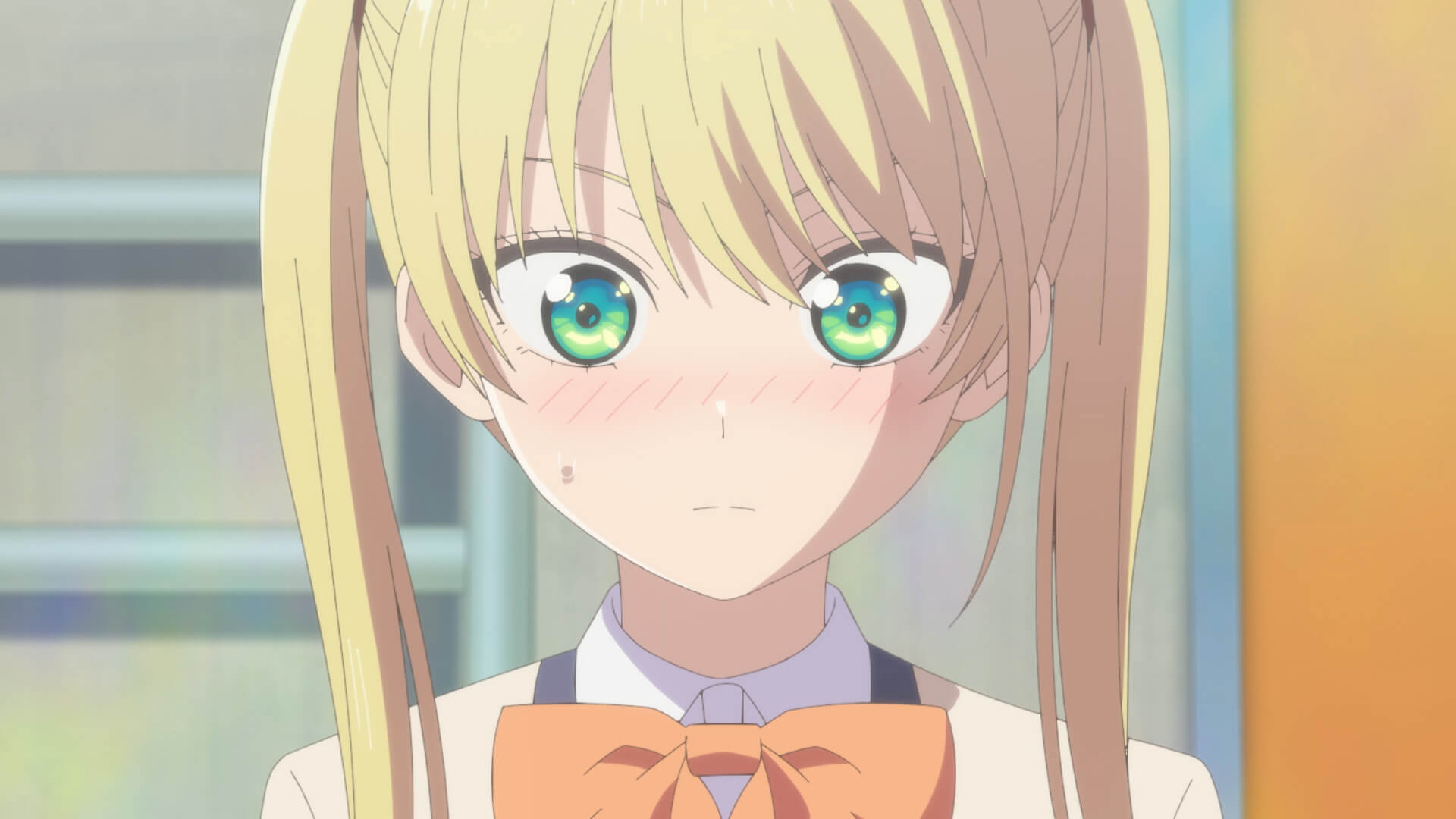 Kanojo mo Kanojo - Chapter 9: The Right of the Tsun Uncovered

After Naoya tells Rika that she thinks she is in love with him, Rika takes him to the roof of the school. Closely followed by Saki and also by Nagisa from a safe distance. Already on the roof, Rika asked him why he thought she was in love with him, and the answer was that his behavior had changed and was quickly ashamed. Before the conversation continues, however, Naoya rejects Rika's possible feelings as he wants to devote himself to his two current girlfriends. Return to the classroom with Saki and Nagisa.

Despite the rejection without a confession, Rika does not give up. So he goes back to Naoya's classroom and when he arrives he bluntly confesses his feelings. But because of the audience, move again or with her to change places. This time he leads him to the place where he found out about his secret, the gym warehouse. There Rika not only steals from Naoya, Saki and Nagisa, but also steals a kiss from Naoya. Be the first kiss. from both.

After leaving school, Naoya stays with Saki and Nagisa, who are shocked by the situation. Her boyfriend's first kiss was stolen right in front of her eyes. However, they don't want a kiss from him at this moment as a consolation. So Naoya decides to push her relationship with the two forward and prepares for a date. Which will be decided to be in the hot springs according to Saki's suggestion.

I will keep attacking until I defeat you!

A key point of this anime is how the characters associated with a relationship with more than one partner develop. While all comedy makes it easier to overlook the complicated feelings characters might have in a much more serious storyline. That doesn't mean they can't show a little of those feelings. What's more, it doesn't mean that if you show much more seriously than expected, you will lose your own essence.

In this case, Rika's feelings, although they were so obvious that even the protagonist (with a somewhat slow mentality) noticed them. But what I liked most about Rika's feelings and her confession is that she was the first to directly show how the way you see someone can change in a moment. While she wasn't the first to confess, I have a feeling that her confession made a far greater impact than Nagisa's for that very reason.

At the time of Nagisa's confession, Nagisa was already in love with Naoya. Aside from the fact that very little of her past has been shown, she knows the reason she fell in love with him.

Mind you, I would have loved to see some drama when Rika was turned down before she could confess. Not a very serious one either. For example, that he was in a mood and sentimental state of sadness and had tears in his eyes, but not so many that they shed. And that he quickly wipes away these tears to give himself courage and to continue on the offensive to conquer Naoya.

So I have to accept that Rika has become my favorite so far. Since then, she has become the main rival of Naoya's current girlfriends. Also, of course, she prefers to monopolize him completely, although she knows that in this situation she could have a place in his harem.

One short scene of "sadness" wouldn't have been too much Kanojo mo Kanojo - Chapter 9. Even if that didn't happen in the original. I don't feel that for those seconds the absurd comedy the anime is about has been lost, nor has it destroyed the personality of the character in question.

An idiot who dates more than one girl

The main storyline of Kanojo mo Kanojo shows a relationship of Polyamory from an absurd perspective because of the comedy of the author. Personally, however, I don't feel that far from reality in several ways. on previous episodesNaoya expressed concern and concern over the promise to make them both happy. Something that, although Saki and Nagisa also wanted to contribute to the relationship, didn't break through. Although the adaptation is so advanced that this is the episode that makes up three-quarters of the anime aired, they haven't had a single date. Even if it was individual and not group appointments.

So I think that the plot progresses very slowly compared to the development of the characters. But that's not why I feel like this anime is slow. Counting on an act like that of Kanojo mo KanojoI think it's much more important to give the characters a better focus than the story. Especially since the characters still have their worries and fears about the relationship. This has been made very clear by Saki throughout the anime, but with greater influence on Kanojo mo Kanojo - Chapter 9. As she is and should be the one who most upsets the effects of this type of relationship.

With that in mind, and back to the main issue I wanted to address, the psychological "torture" you might endure in such a situation, I think you are well represented in your own way. In this particular case, the relationship needs to be adapted to the main anime genre and not the other way around. Also, a relationship won't work if only one of the parties contributes to it.

Naoya still has traces of his mindset about making Saki and Nagisa happy because he was the one who suggested this relationship. There is some truth to this, but it is not entirely correct to think that way. Well, there is no point in making the other party happy if you weren't happy even during that time for 'x' or 'y' reasons. The pressure to keep a promise or meet expectations could make you lose focus on why you tried so hard. In this case it would not be "I want to make you happy", should be "I want us to be happy".

For her part, Saki suffered consistently from the same Kanojo mo Kanojo Until now. She got involved in a strange relationship by giving in to the pressure. She loses her monopoly on her boyfriend. Not sure why that happened. Thought i sincerely look natural for any person is in a relationship of Polyamory or in a "mutual" relationship but with a bad ending, a breakup. 'Why is this happening to me?','What did I do to deserve this?','Is it because something about me isn't worth it?“Are questions that I see as normal in a similar situation that Saki is going through.

The already known 'It's not you, it's me'. In all honesty, this phrase doesn't help me feel better, even if you said that you were the person who changed my mind, I would feel bad about myself for not knowing it, besides, I would raise my doubts about the exact cause continue change decision. Like everything mentioned above, this is my way of seeing and feeling things.

A relationship is not about seeing / competing who is contributing more, it is about supporting each other so that it progresses properly. That's how I believe it, regardless of whether it is a "normal" relationship or not. Of course, the more people involved, the greater the problems to be solved and the more necessary mutual support is.

I find this key to be shown in an appropriate manner Kanojo mo Kanojo with some inexperienced adolescent protagonists in romantic relationships who experience all kinds of feelings, compulsions, and fears.

Yuukoku no Moriarty Anime is getting a new OVA soon

The One Piece editor commented that the end “is getting closer”