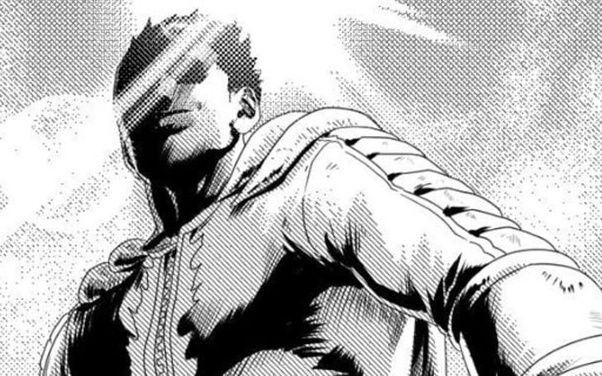 Incredible but true, after eight years and 135 chapters of waiting, ONE and Murata have finally decided to show the number one hero from One-Punch Man, Blast, this time in full and in his spectacular hero costume. This is the first time that the top hero of the S-Class is shown without shadows or other censorship.

Blast first appeared in chapters 109 of the webcomic and 84 of the manga, but in both cases the writers decided to show him from behind or just show the silhouette. in the instead first part of chapter 135The hero was shown in full during a flashback by Dolcetto Mask who was on the verge of a nervous breakdown due to the events of the past few weeks.

As you can see below Blast presents himself as an incredibly strong man, sturdy, and wearing a costume with a cloak and a bed with his name engraved on it. So far not much has been revealed about the hero other than that, like Saitama, he views his work as "just a hobby".

The design is fundamentally different from the one that ONE chose for the webcomicand is much more mature and innovative. The appearance of Blast is very reminiscent of that of All Might in My Hero Academia and actually seems to be the theories behind which The hero could have been Saitama himselfor an alternate version of it from the future.

What do you think about it? You like it? Please let us know by leaving a comment in the box below! If instead you want to refresh your memory, we recommend checking out the summary of the last chapter of One-Punch Man.

For the first time we see Blast in One Punch Man. pic.twitter.com/2uBwOhVXPj

HOLY FUCKING SHIT BLAST IS IN MASK'S FLASHBACK IN THE LATEST PUNCH MAN RAW HOLY FUCK THAT'S THE MOST WE HAVE SEEN HIM AAAAHHHHHHHHHH pic.twitter.com/XuZJqhlys8

when I thought Blast was Saitama, but he actually isn't .. wow .. first appearance of Blast in One Punch Man .. pic.twitter.com/qV10RLtSmI

BLAST FINALLY DISCOVERED IN A PUNCH https://t.co/Y5B8WDmA4C via @Youtube pic.twitter.com/yfaGLDmPoN

Mahouka Koukou no Rettousei: Raihousha-hen reveals the cover of his first Blu-ray / DVD