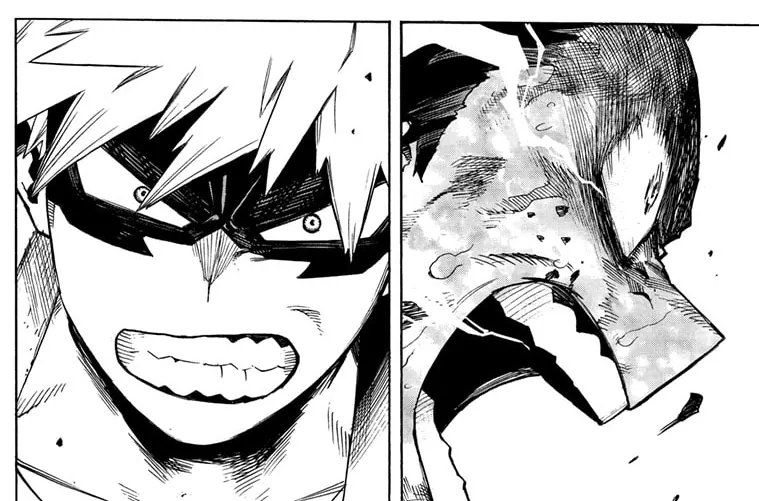 Chapter 286 of My Hero Academia landed on MangaPlus a few hours ago, and apparently The escalation that began months ago seems to have finally peaked. If the penultimate chapter was mainly devoted to Bakugo, the latter has instead returned to focus on the protagonist Izuku Midoriya. now literally out of control.

The story picks up right where it left off last week, with Bakugo sacrificing himself to save Deku's life. Shigaraki mocks the aspiring hero's efforts, calling his gesture "another useless sacrifice in the name of a meaningless battle". Soon afterwards, Todoroki succeeds in intervening. Rescuing Bakugo and Endeavor from certain death.

The focus then shifts to Gigantomachia, which is still in motion and is now on the verge of reaching its master. The Colossus enters Saiko, Osaka Prefecture, and it destroys everything in front of it Forcing the heroes to organize to ensure the swift evacuation of the citizens.

Meanwhile Deku, completely loses control and blocks the villain's second attack with his teeth. Now in the grip of anger, the protagonist Shigaraki comes too close, Who takes the opportunity to steal One for All. The two are then in a parallel dimension where Deku can finally see All for One while he exercises his control over Shigaraki.

Midoriya, stuck on the ground and unable to move, he sees Nana Shimura appear at his side, ready to fight in their place along with the other owners of One for All.

What will happen now Will Deku be able to keep his power? To answer these questions we will have to wait for the release of Chapter 287, which will arrive on MangaPlus at 6:00 p.m. next Sunday.

Among us, the cheaters hit the anime thanks to a new set of special moves