This review on Shingeki no kyojin: The last season contains spoilers. If you haven't seen the chapter we recommend that you do it and then go back to read the review.

Gabi decides to flee and Falco follows her. She is unforgiving and wants to question Zeke, her firm beliefs in demons and good Eldians are there. In the forest, they are discovered by a girl, Kaya, who takes them to a stable so they can rest. Falco is in their names and they eat with them, except that Gabi is very opposed to demons and it is difficult for her to be with them. On the flip side, Hange is intercepted by citizens complaining but she says things have changed and goes to question seven people, including Floch, who are being tried for information disclosure. Gabi can't stand their stay, but Kaya already knew they were from Marley. She speaks to them and asks them what their mother's fault is in order to finally point out a possible escape. In Marley, Magath outlines the plans for the porters, who believe six months will be a long time.

There are three interesting things that in some ways gave us all or most of the chapter: Gabi's Fear, Hanges Fear, and Paradis and Marley's Plans. The Kaya thing didn't separate them because I think it would enter where Gabi is as they are two sides of the same coin. The makeup or words of Eren's followers seem important to me, but I haven't seen it develop independently of how Hange interacts, at least not in this chapter. We will comment on these things already. In the visual field I saw certain scenes poorly drawn, not so much, but noticeable, especially in Gabi's face, that there were moments when it didn't look like her. The rest seemed fine to me, although it's not a chapter that shines through action scenes, I think it's very good due to Gabi's development which leads us to better understand her and blind gullibility.

Gabi is the one who is the focus of the chapter. We already know what ideas were instilled in her. They made her realize that she and the Eldians are from a cursed line of demons and that they must pay for their mistakes. For Gabi, all Eldians have to pay for the ideas they bring in for what their predecessors did. And in a way isn't it? Eldia was an empire that subjugated and devastated civilizations. The weight of the story in the course of the story did not spare Marley, who manages with her changes to subdue the children of the vanished empire and to hold on to their system.

Gabi carries this in the dichotomy: good Eldian and devil. Every evil Eldian is a demon, every Eldian who does not submit to Marley is a demon. This is the truth for Gabi and some others, and because it is the truth she has to defend it, because it is her livelihood to fight. This truth gives meaning and power to your life. Any antithesis will crack, as we've seen in this chapter. Gabi only wants to be accepted by the society in which she grew up.

Rumbling is an event that is presented to us more and more every day and that we know little about. It is something that only a Titan with specific requirements can do and will help the Eldias Empire emerge again. Hizuru is interested in this plan because they are also a subject country and they are using the old alliance with Eldia to influence Paradis' politics, which is a good move as it seems to me that they are no longer an ally of them, but rather see as puppets. and they plan to use the rumble for their plans. And it seems that everyone wants to use the rumble for their own purposes, this implies that somehow everyone wants to use Eren without knowing that they could use them all. Anyway, Hizuru is investing in the project and the plane is proof of that. What will happen to the Manhattan Project?

Hange spoke before a military meeting, which was mainly an interrogation. She is stopped at the door by several key citizens asking for explanations because if we remember the third season we will know that it was promised or wanted to try to get the information public, that's why it needs it Explanations. especially from a group and a person they are sympathetic to. But Hange gives one of the best answers: Since information is opened internationally, it can no longer be public. If something expires abroad because you never know whether there are traitors in the ranks or spies, this can significantly change the plans that have been drawn up. This is fundamental in international politics. Information is a good that should be exploited: your enemy's ignorance of you brings you advantage, and the enemy's knowledge brings you much more. But look at what Talleyrand did for France as a loser. Knowledge is power.

Holger, Wim, Louise, 3 recruits and Floch were arrested for disseminating information about Eren's arrest. Floch explains that they did this because it seemed unfair that whoever brought them victory was captured, especially since he is the one who can restore and rule the new realm of Eldia. These are a few words: messianism. The idea that a chosen one or a savior will restore a country's former glory. The Jewish people had and I think they still have this idea: a warrior leader who will free them from the yoke of others. Something similar happens to Floch, he blindly believes in Eren and his intentions because he clings to the idea of ​​a glorious past that needs to be restored. This is a good topic to talk about sectarianism because there are strong characteristics behind it, but I'll just limit myself to saying that Floch has a nationalist idea that justifies his actions. This gives him the opportunity to understand the last thing he says: If so, it is for the good of the people on the wall to accept.

I've read the word a lot in the subtitles and always come from Gabi's mouth. This has already been explained in the lines above: Gabi uses the story she taught her to justify the situation of the Eldians and the Order of Marley. Does this make sense? Oh well. The Christian and Jewish God worked in this way: Adam and Eve sinned, the offspring were condemned. About Gabi: Your ancestors sinned, now the Eldians have to pay. Furthermore, in Asian societies with a Confucian tendency, the child may be marginalized because of the father or grandfather, and his fate depends on the reputation of his predecessors. And part of the world works like this, the son of a famous name is treated better (this would just be an example the other way around).

I would say that Gabi needs sin to feel good. When there is no sin, there is nothing to forgive, so there is nothing to get because you already deserve it, so your whole struggle becomes irrelevant. If Gabi believes that she has no sin, she will start to think like Kaya, why do good people pay for sinners?

After all, I couldn't let go of the relationship between Gabi and Kaya. The latter already knew who they were, she just didn't say anything because she wants to be good like Sasha (the Flashback was very explicit), and also that he doesn't believe that people who have done nothing wrong deserve to be punished. Kaya lives more in the present, disagreeing that the Eldians of today should pay for the mistakes made hundreds of years ago because they are not the same. And not because the past does not matter, but because it has to be overcome in order to live together, and Kaya has shown that different Eldians can live together without seeking harm to each other. While Gabi seeks repentance, Kaya just feels like she has to be a good person for no clear reason. While Gabi represents nationalism, Kaya represents humanitarianism.

It was a chapter with essence. Gabi seems like an excellent character to me and it's ironic that people who hate Gabi behave like her. I would say most people are like them, we think we are right and we close. Few chapters and there are already rumors of a sequel or movie. Let's hope for a dignified ending anyway. 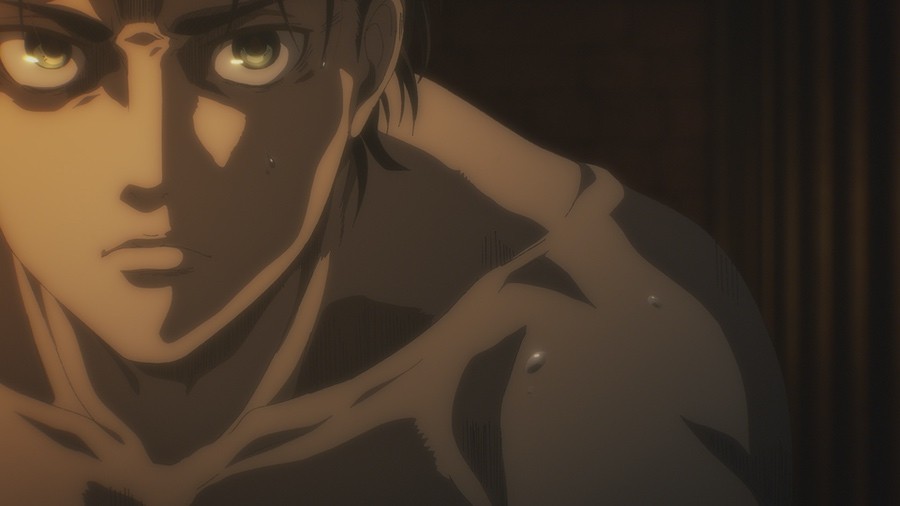