Sweety Otaku May 22, 2020
7 Min Read
Chapter 6 It contains a spoiler, if you already saw the chapter please read on, otherwise you can see it on any of the platforms and return. Warning, this series will be the living demonstration that the ego can do more, but if there is love, perhaps it can win.

Kindness and good values ​​come from good education, but not only that which is taught in schools or academies, but that which comes from home. The lessons taught by our family members help us to form ourselves in character and personality, because from there will arise how well we carry out our actions and how well our mouth speaks. Some inquire what makes them exemplary human beings through their own experiences, reading, television or simply observation. But without a doubt it is to admire those who give everything for the general good and abandon selfishness for the self, for a us in Kaguya-sama: Love War - Episode 6. 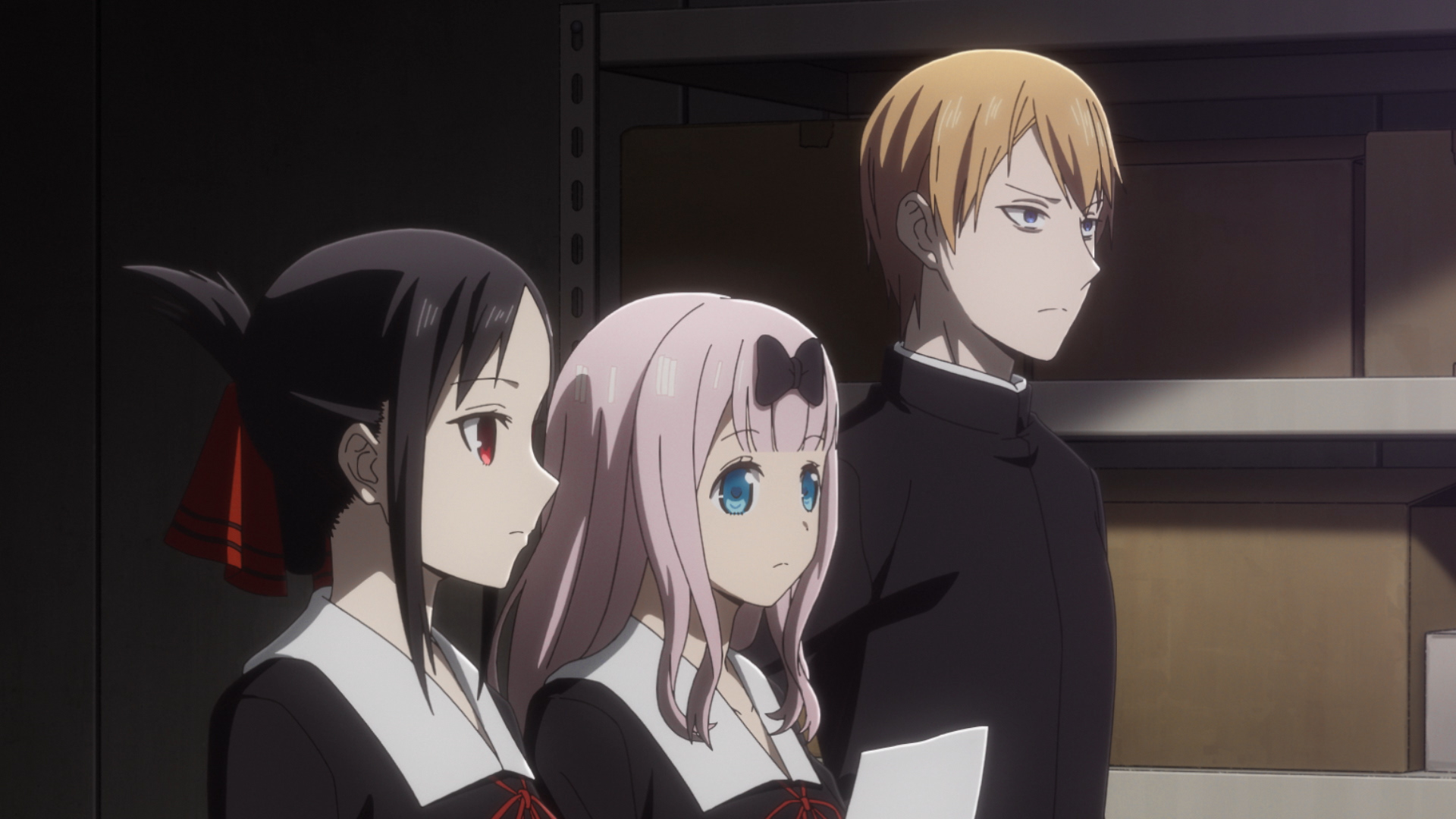 The elections are approaching and our previous student council shows a 90% advantage over Lino Miko, an opponent who, under the words of Yū Ishigami, “I want us to defeat Lino Miko in today's elections by a large margin”. Even though those four boys seem important and very determined to win the battle, Lino's friend Osaragi Kobachi will try in his speech to raise the image of his friend, but his words only manage to bore the audience. Now being Kaguya Shinomiya's turn and leaving everything she is and can achieve aloft, she begins her speech strategically calling the attention of the audience with a dull noise in the microphone.

The former vice president of the previous student council Kaguya Shinomiya, comes to present the proposals and merits to be re-elected by the former President of the Student Council Miyuki Shirogane. As a visual prop entitled “Achievements of the Former President of the Student Council, Shirogane Miyuki”, the attention has been focused on that of his Former Vice President, the statistics, the investment that was made of the economic resource. But this is not the only strategy, because within the audience Hayasaka Ai's roles are to motivate the taste for Shirogane, while those who want to speak ill of the Former President will be carried by teachers who were strategically located by Chika Fujiwara.

The points in favor do not end, because now through a video titled "Student Council, President Shirogane Miyuki. Projected operations of the Council ”, will show what benefits will be obtained by the clubs and their members, projected benefits that achieved the ovation of all those present. Now it is the turn of the participants to introduce themselves and it is here when it is the turn of Lino Miko, but his nerves are more than his words and his past full of loneliness for the work of his parents, his ambition for what is right, his work hard at school and her desire to be president to fight for what is right, have driven her to apply once again. But being the mockery of others, it would not allow students to vote for it, that's why the Shirogane comes on the scene.

The point of our Former President and Ishigami is that winning is not everything if it is so easy, because although Lino's abilities are many but his proposals are some ridiculous, she could give more of herself and face the public, but her fear does not leave her. That is why he fixes his gaze only on Shirogane and this is supported by all of the former council. Now she is listened to and her proposals addressed, defending the academy as a declining brand, supporting the idea of ​​morality as an image that draws support from others, and defending skinheads as her personal fetish. That debate lasted half an hour and was so impressive that no one dared to interrupt it.

Even so, Lino Miko lost the elections, but many voted for her and at the end of the results they supported her, even the #shavedheads became a trend on instagram how I support the former candidate. So much was the surprise that her friend Osaragi Kobachi could not contain the tears of joy for her friend. Still, it was a surprise for Kaguya and Chika, as they were both afraid of the results of the elections, even so, El Hora President reelected Miyuki Shirogane, has in mind for Miko the position of "Financial Audit and General Affairs Officer". The margin of victory was 280 votes for Miko and 320 for Shirogane, it was a very close vote.

KAGUYA IS NOT CALLED

Now that the nerves to win the elections have calmed down, the President has approached Lino Miko to offer him to be part of the Student Council, to which Lino is asked a question full of surprises and happiness, now she must think about whether to accept or not. As for her friend Osaragi Kobachi, she decides not to, since that topic is not in her interest, while two old members Chica Fujiwara and Yū Ishigami are nervous about not being recruited again, but their nerves calm down when they are called as Secretary and Treasurer.

Now Kaguya is the most anxious, since she does not understand how Shirogane has not come to visit her at the infirmary after she passed out. Still, her physical and mental stability are unbalanced because she does not understand how the President has not called her to be named and it is here that she begins to judge herself and think that perhaps the President does not like her and that he is simply kind to everyone and does not Only with her. But quickly after that confession, Shirogane appears, expounding some words that would leave any viewer with goosebumps, because he explains how much he needs from his companions and especially from her, because without her he is nothing. Gratefully, she asks her to be the Vice President again and she accepts with a wave of her hands… She is the one who receives all the attention, affection and specialty of Shirogane. Now the council will resume its work and begin its hard struggle to meet the expectations of the Shuchiin Academy and its students, a hard team effort.

This chapter has surprised me as much as the others, it has made me laugh perhaps less than others, but it has given me as many lessons as a complete series could, since there is no doubt that our beautiful president has that title won not only by the help from his team, but by his actions that arise from himself. Above all, he puts the value of people above selfishness even if it hurts to do so, but it is this that has given him the confidence of his friends and the support of his acquaintances.

I must admit that from the beginning I knew that the president would win, although the suspense and the battle that took place on stage became so complex and competitive, that for a moment I thought that perhaps Lino Miko would win and that later they would do another chapter where she would yield the chairmanship or something would happen and Miyuki Shirogane would regain her seat on the council.

I was touched by Miko's past, she is a girl who grew up with the idea that she must fight for a better world and perhaps she does not know how to identify what is necessary from the extreme, although many of her proposals were very well founded. Even so, she did not allow herself to be carried away by the defeats, although the number of them marked her safety when addressing the public.

It is there that Shirogane's unsolicited help comes into play and changes the entire perspective of the election, giving the girl an almost victory. His security was based on setting his sights on the now President and presenting his ideas with arguments without fear. Not only Shirogane shined here but also Ishigami, because all the time we believed that his annoyance towards Miko was for something that she had done to him, but the truth is that it was always the lack of confidence that he saw in her over the years what bothered him. Both boys on the council shone brightly.

In the end it became clear to us that the declaration of love of Shirogane and Kaguya is getting closer, it could happen this season, because just enough to see the signs and how both get closer to each other without noticing that closeness. The time will come when without warning, both will let the other know their feelings and that war will change course to a different one, perhaps the theme is how they maintain that and what is involved. They will not be in high school all their lives and I do not know when Manga will finally end, I only know that when that happens we will feel that our boys grew up and left on a better path.

Senyoku no Sigrdrifa delays its premiere until October

Hamefura and Arte announce a collaboration